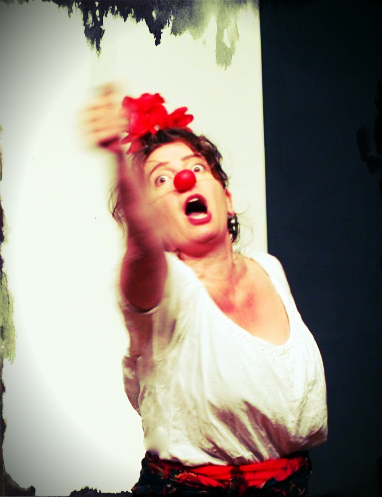 Kendall Cornell, leader of Clowns Ex Machina, has been creating and performing clown work since falling in love with it. As a soloist, her dynamic clown pieces, such as Flamenco Girl, Pink Salome, The Maneater, Glamourpuss, P.S. de la Resistance, and The Wallflower have been presented at LaMama, The New York Clown Theatre Festival, Six Figures’ Artists of Tomorrow Festival, the International Festival de Pallasses, and elsewhere in NYC and abroad. In 2007 she was nominated for the Clown of the Year award by the New York Downtown Clown Revue. At the helm of Clowns Ex Machina (formerly Kendall Cornell’s Soon-To-Be-World-Famous-Women’s Clown Troupe) Kendall has been creating and directing ensemble shows with this troupe of 9 (and sometimes more) women clowns. Beginning in 2005, she directed and ringmaestraed 16 women clowns in The Clown Pageant. Subsequently, Kendall was commissioned by Canada’s Cirque du Soleil to create a special clown extravaganza with her women clowns for the NYC opening of their circus, Corteo. Since then Kendall has created Not Just For Shock Value: A Femmes-Clowns Assemblage, Clowns By Dead Reckoning, Clown Axioms, Clowns Full-Tilt, and Oil of Olé (in collaboration with NYC flamenco artists). Kendall has also worked with David Shiner (Fool Moon, Cirque du Soleil) in directing the U.S. version of the circus-theatre spectacle, Pomp, Duck & Circumstance. For Brooklyn-based Cirque Boom’s The Hoffman Circus, she created the various clown entr’actes. In NYC downtown theatre, she worked for five years with Waterline Theatre Company as a member of the Artistic & Producing Board, performing in many new works and presenting a multitude of new artists. On her own, in the guise of Moxie Productions, Kendall produced (and performed) in Danny & the Deep Blue Sea and Strindberg’s Miss Julie. She has also produced all her own clown creations (listed above), including the full-length collaborations Working Without Annette and The Holiday Show. Kendall also created and starred in an innovative short clown film, A Clown Idyll. In addition to clown and theatre, Kendall has a background in modern dance, and she danced alongside Jennifer Muller/The Works Company for over 15 years, also teaching Muller technique classes in NYC and Europe. Kendall’s foremost acting training has been with Alan Langdon at Circle in the Square, and she has trod the boards in many downtown NYC theatres. Her clown training has been with some of the best clowns and teachers in the western world such as David Shiner (whom she assisted in his master classes), Chris Bayes, Angela de Castro, Ami Hattab, and the renowned Philippe Gaulier (whom she also assisted, after bringing him to teach in the USA for the first time). Currently, Kendall is a sought after teacher and coach, holding regular workshops for women clowns in NYC.