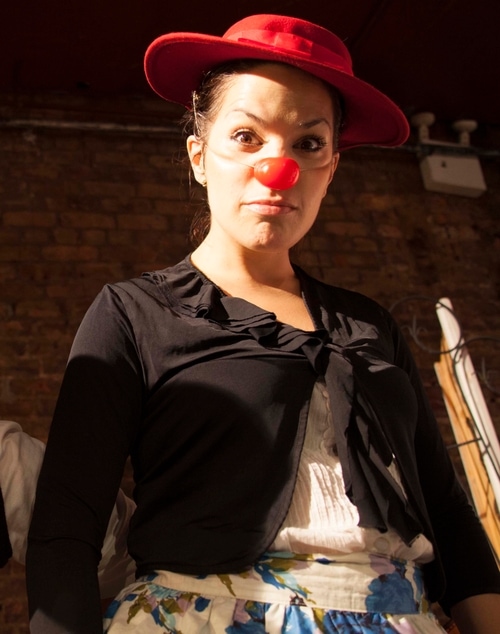 Michaela Lind Is a Swedish brunette with Portuguese blood who can understand 6 languages. She has sung the ABBA medley alongside the Chinese Children’s Opera in Beijing, traveled to the Edinburgh Fringe with a tupperware trunk filled with life size puppets, street performed in the Eastern block of Europe, and has played Shakespeare in the cold North and in the hot and sticky NYC summer. She trained at GITIS (Moscow), Michael Howard Studios, HB studios and many other places, and received a degree in Ritual Performance Techniques at City University of New York, after which she departed to the wild west to find the Heyoka. The past year she had the time of her life with the Nouveau Clown Institute and Garden of Fools in the forest outside Paris, France. She has performed Butoh-Acrobatic stilts with Carpetbag Brigade, Grotest Maru, and Nemcatacoa Teatro in the US and Canada. She loves to make jewelry and other things with her hands, often gets lost in antique stores, and is most likely a nomad at heart as she has a recurring dream to convert a van and sail off into the future. www.michaelamlind.com